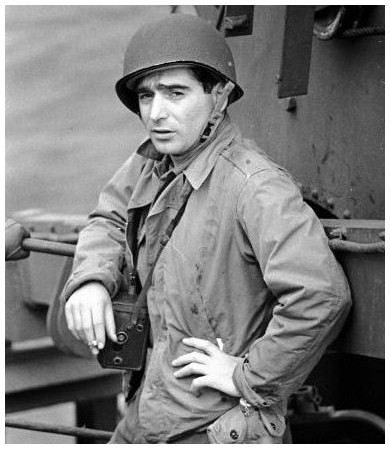 Robert Capa (Hungary October 22, 1913 – Vietnam May 25, 1954), born Endre Ernő Friedmann, was a Jewish combat photographer and photojournalist who covered five different wars: the Spanish Civil War, the Second Sino-Japanese War, World War II across Europe, the 1948 Arab-Israeli War, and the First Indochina War. He documented the course of World War II in London, North Africa, Italy, the Battle of Normandy on Omaha Beach and the liberation of Paris. His action photographs, such as those taken during the 1944 Normandy invasion, portray the violence of war with unique impact. In 1947, Capa co-founded Magnum Photos with, among others, the French photographer Henri Cartier-Bresson. The organization was the first cooperative agency for worldwide freelance photographers.

Born Endre Friedmann to Dezső and Júlia Friedmann on October 22, 1913 in Budapest, Hungary. Deciding that there was little future under the regime in Hungary, he left home at 18.
Capa originally wanted to be a writer; however, he found work in photography in Berlin and grew to love the art. In 1933, he moved from Germany to France because of the rise of Nazism, but found it difficult to find work there as a freelance journalist. He adopted the name "Robert Capa" around this time because he felt that it would be recognizable and American-sounding since it was similar to that of film director Frank Capra. (In fact, "cápa" is a Hungarian word meaning 'shark'.) Capa's first published photograph was that of Leon Trotsky making a speech in Copenhagen on "The Meaning of the Russian Revolution" in 1932. 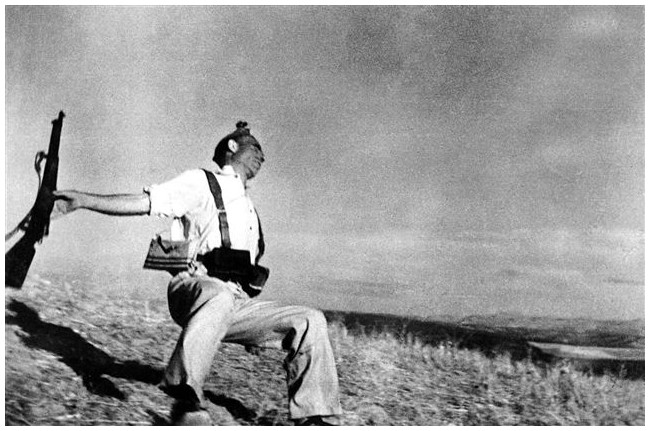 From 1936 to 1939, he was in Spain, photographing the horrors of the Spanish Civil War, along with Gerda Taro, his companion and professional photography partner, and David Seymour. In 1938, he traveled to the Chinese city of Hankow, now called Wuhan, to document the resistance to the Japanese invasion.

In 1936, he became known across the globe for a photo (known as the "Falling Soldier" photo) long falsely presumed to have been taken in Cerro Muriano on the Cordoba Front of a Workers' Party of Marxist Unification (POUM) Militiaman who had just been shot and was in the act of falling to his death. There has been a long controversy about the authenticity of this photograph. A Spanish historian identified the dead soldier as Federico Borrell García, from Alcoi (Alicante). This identification has been disputed. In 2003, the Spanish newspaper El Periodico claimed the photo was taken near the town of Espejo, 10 km from Cerro Muriano, and that the photo was staged. In 2009, a Spanish professor published a book titled Shadows of Photography, in which he showed that the photograph could not have been taken where, when, or how Capa and his backers have alleged.
Many of Capa's photographs of the Spanish Civil War were, for many decades, presumed lost, but surfaced in Mexico City in the late 1990s. While fleeing Europe in 1939, Capa had lost the collection, which over time came to be dubbed the "Mexican suitcase". Ownership of the collection was transferred to the Capa Estate, and in December 2007 was moved to the International Center of Photography, a museum founded by Capa's younger brother Cornell in Manhattan.

At the start of World War II, Capa was in New York City. He had moved there from Paris to look for new work and to escape Nazi persecution. The war took Capa to various parts of the European Theatre on photography assignments. He first photographed for Collier's Weekly, before switching to Life after he was fired by the former. He was the only "enemy alien" photographer for the Allies. On October 7, 1943, Robert Capa was in Naples with Life reporter Will Lang Jr. and photographed the Naples post office bombing 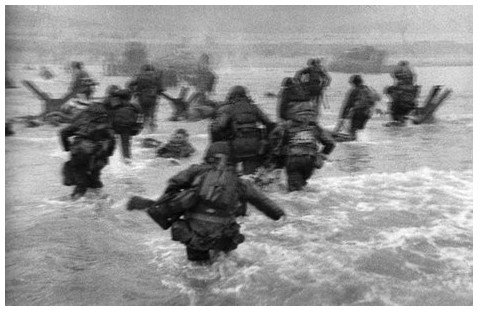 His most famous work occurred on June 6, 1944 (D-Day) when he swam ashore with the second assault wave on Omaha Beach. He was armed with two Contax II cameras mounted with 50 mm lenses and several rolls of spare film. Capa took 106 pictures in the first couple of hours of the invasion. However, a staff member at Life in London made a mistake in the darkroom; he set the dryer too high and melted the emulsion in the negatives in three complete rolls and over half of a fourth roll. Only eleven frames in total were recovered. Capa never said a word to the London bureau chief about the loss of three and a half rolls of his D-Day landing film.. 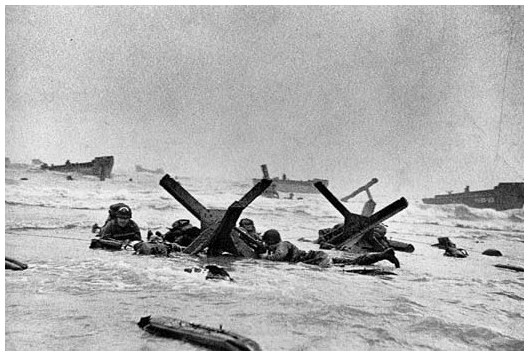 Although a fifteen-year-old lab assistant named Dennis Banks was responsible for the accident, another account, now largely accepted as untrue but which gained widespread currency, blamed Larry Burrows, who worked in the lab not as a technician but as a "tea-boy". Life magazine printed 10 of the frames in its June 19, 1944 issue with captions that described the footage as "slightly out of focus", explaining that Capa's hands were shaking in the excitement of the moment (something which he denied). Capa used this phrase as the title of his autobiographical account of the war, Slightly Out of Focus. 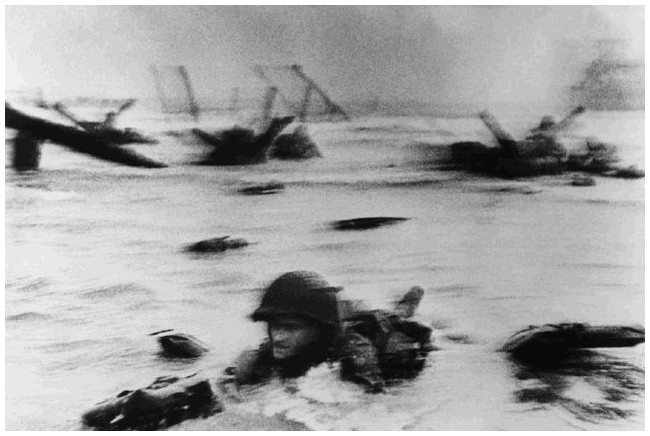 In 1947 Capa traveled into the Soviet Union with his friend, writer John Steinbeck. He took photos in Moscow, Kiev, Tbilisi, Batumi and among the ruins of Stalingrad. The humorous reportage of Steinbeck, A Russian Journal was illustrated with Capa's photos. It was first published in 1948.

In 1947, Capa founded the cooperative venture Magnum Photos with Henri Cartier-Bresson, William Vandivert, David Seymour, and George Rodger. In 1951, he became the president.
Capa toured Israel after its founding, and supplied the copious photographs for a book on the new nation written by Irwin Shaw, Report on Israel.

In the early 1950s, Capa traveled to Japan for an exhibition associated with Magnum Photos. While there, Life magazine asked him to go on assignment to Southeast Asia, where the French had been fighting for eight years in the First Indochina War. Despite the fact he had sworn not to photograph another war a few years earlier, Capa accepted and accompanied a French regiment with two other Time-Life journalists, John Mecklin and Jim Lucas. On May 25, 1954 at 2:55 p.m., the regiment was passing through a dangerous area under fire when Capa decided to leave his jeep and go up the road to photograph the advance. About five minutes later, Mecklin and Lucas heard an explosion; Capa had stepped on a landmine. When they arrived on the scene he was still alive, but his left leg had been blown to pieces and he had a serious wound in his chest. Mecklin called for a medic and Capa was taken to a small field hospital where he was pronounced dead on arrival. He died with his camera in his hand. 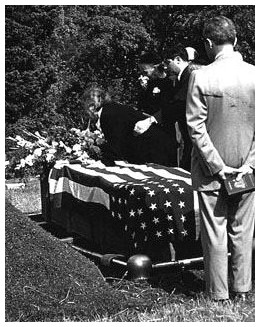 In 1934 "André Friedman", as he called himself at that time, met Gerda Pohorylle, a German Jewish refugee. The couple lived in Paris where André taught Gerda photography. Together they contrived the name and image of "Robert Capa" as a famous American photographer. Gerda took the name Gerda Taro, becoming successful in her own right. She travelled with Capa to Spain in 1936 with the intention to document the Spanish Civil War. In July 1937 Capa went on a short business trip to Paris while Gerda remained in Madrid. She was killed near Brunete during a battle. Capa, who was reportedly engaged to her, was deeply shocked and never married.

In February 1943 Capa met Elaine Justin, the beautiful young wife of actor John Justin. They immediately fell in love and the relationship lasted until the end of the war, although Capa spent most of his time in the frontline. Capa lovingly called the redheaded Elaine "Pinky," and their romance became the topic of his war memoir, Slightly Out of Focus. In 1945, Elaine broke up with Capa and married her friend, Chuck Romine.
Some months later Capa became the lover of actress Ingrid Bergman, who was travelling in Europe at the time entertaining American soldiers. In December 1945, Capa followed her to Hollywood, where he worked for American International Pictures for a short time. Bergman tried to persuade him to marry her, but Capa didn't want to live in Hollywood. The relationship ended in the summer of 1946 when Capa traveled to Turkey. 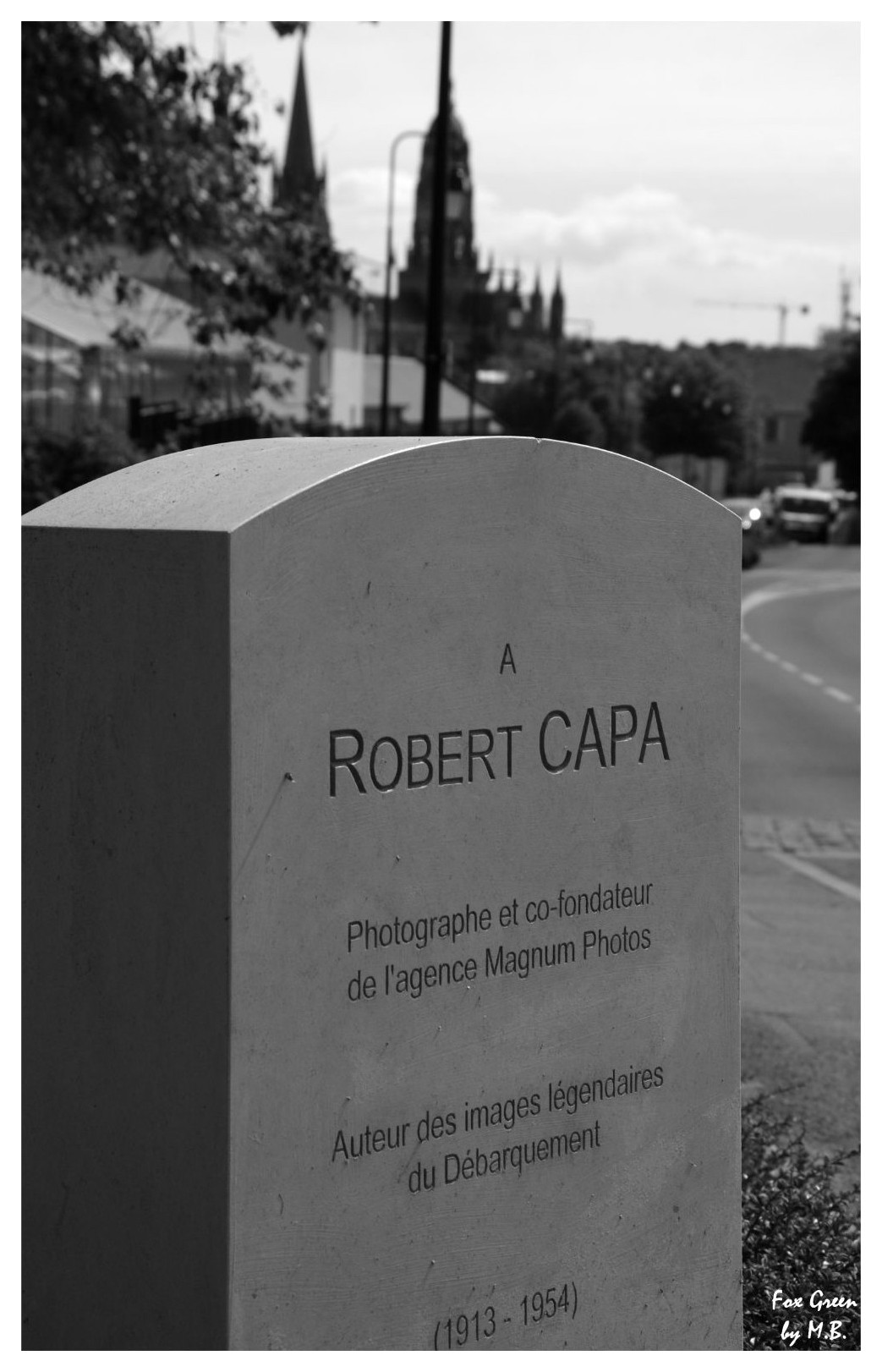 Capa's younger brother, Cornell Capa, also a photographer, worked to preserve and promote Robert's legacy as well as developing his own identity and style.

The Overseas Press Club created an award in his honor, the Robert Capa Gold Medal. It is given annually to the photographer who provides the "best published photographic reporting from abroad, requiring exceptional courage and enterprise".

Capa is known for redefining wartime photojournalism. His work came literally from the trenches as opposed to the more arms-length perspective that was the precedent previously. He was famed for saying, "If your picture aren't good enough, you aren't close enough."

Capa is credited with coining the term Generation X. He used it as a title for a photo-essay about young men and women growing up immediately after the Second World War. The project first appeared in "Picture Post" (UK) and "Holiday" (USA) in 1953. Describing his intention, Capa said 'We named this unknown generation, The Generation X, and even in our first enthusiasm we realised that we had something far bigger than our talents and pockets could cope with'.

In 1995, thousands of negatives to photographs that Capa took during the Spanish Civil War were found in three suitcases bequeathed to a Mexico City film-maker from his aunt. In 1939, after Capa fled Europe for America during World War II, these negatives were left behind in a Paris darkroom and they were assumed lost during the Nazi invasion of Paris. It is not known how the negatives traveled to Mexico, but apparently Capa asked his darkroom manager, a Hungarian photographer Imre Weisz, to save his negatives during 1939 and 1940. Jerald R Green, a professor at Queens College, was informed by a letter from the Mexican film-maker about this discovery. In January 2008, the negatives transferred to the Capa estate, but the Mexican film-maker has asked to remain anonymous.
The International Center of Photography organized a travelling exhibition titled This Is War: Robert Capa at Work which reexamines Capa's innovations as a photojournalist in the 1930s and 1940s with vintage prints, contact sheets, caption sheets, handwritten observations, personal letters and original magazine layouts from the Spanish Civil War, the Second Sino-Japanese War and World War II. The exhibition has been on display at the Barbican Art Gallery and the International Center of Photography of Milan and was on display at the Museu Nacional d'Art de Catalunya until September 27, 2009. It then moved to the Nederlands Fotomuseum from October 10, 2009 until January 10, 2010.

A wish of his was to be an unemployed war photographer. 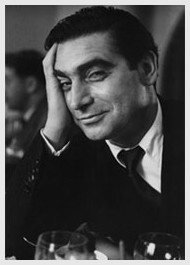